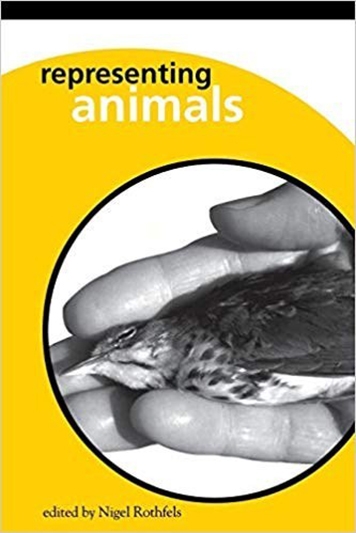 Steve Baker contributes to the essays in the book, Representing Animals by Nigel Rothfels (ed) (2001)

Baker’s thinking is significant; he is an artist and academic. He is Emeritus Professor at University of Central Lancaster, and he is interested in how animal advocate artists think and make their work. (Baker 2019)

This book is interesting to the illustrator and animal advocate. As an image maker I am part of society that describes our culture’s knowledge of animals. Consequently, I am looking for analysis, academic and conjectural, about how creativity and animal rights are combined. I am particularly interested in Steve Baker’s essay, in part 2 of the book, called, What does becoming-animal look like?

The title of the book, Representing Animals, appears to succinctly encompass all that an animal advocate artist might be seeking guidance from. Certainly there is extensive discussion to consider in this collection of essays that explore creativity about and for animals. The book is divided into three parts that explore the history and growing interest of the place of animals, ‘within and outside human culture’ (Rothfels, 2001 p xi).

Artist Lisa Moline illustrates the cover and start of each of the three parts. She uses photographs of small, dead animals – a bird, an empty shell, and a mouse. These are not cute images, they are real, but not graphic, and they describe reality. Each bird or animal is cupped in human hands that are open in honest display and say, here is, or was, animal.

Nigel Rothfels’ introduction puts the book’s contents into context. He references the making of Jaws, the movie, and how it played into human fears of unknown ocean depths, fears of what lies out there in the dark. Rothfels explains that the story’s author, Peter Benchly, became an advocate for sharks, after learning about the impact of hunting on population numbers. He has since committed to never portraying negative images of animals again and made numerous films for National Geographic. However, Rothfels comments that these types of films are not always truthful portrayals themselves, driven by needs for good imagery and high ratings.

Part 1 of the book explores the history of animal image making. Here Andrew C. Isenberg gives analysis of North American beliefs around wolves in the early nineteenth century through the work of wilderness writer and illustrator Ernest Thompson Seton.

Part 2 is the heart of the book and begins with Steve Baker’s essay where he explores the obligations of the advocate artist. Baker insists, ‘the artist is ultimately responsible to the animal’ (Baker, 2001 pg. 67) and he explores the question of responsibility through his readings of Gille Deleuze and Félix Guattari’s 1980 book, A Thousand Plateaus. He uses the complexities of their philosophy of identity and creativity, to ask questions about making art from the identity of animal. He describes Delueze and Guattari’s writings as ‘seductive but elusive ideas’ (Baker 2001 p. 68) but delving in to these ideas can help an artist make work differently, and be aware of cultural messages that may be read in their work.

Baker explores his ideas further through critique of contemporary artists such as, Olly and Suzi, Carolee Schneemann, Damien Hirst, and video artist Edwina Ashton. Through these artists Baker explores ideas that attempt to express animal values in art instead of human values.

For contrast, Baker gives us the work of Olly and Suzi, British contemporary artists committed to endangered species. They have travelled the globe, working with conservationists and they paint with the speed and immediacy that Baker  supports. (fig 1).

Moving on, Baker reviews Carolee Schneemann’s art and her relationship with her cats Cluny II and Vesper, in her photographic project Infinity Kisses. Baker acknowledges Schneemann’s view that her cats have their own perspective in the work; they are just being cats, going about their daily lives. Baker comments that this work is at risk of not being taken seriously, yet interestingly, Schneemann’s cats are far less likely to be affected by the manipulation of subjects that Rothfels alludes to in his Jaws introduction.

Like Schneemann, Sue Coe sees herself as another animal amidst animals. Her work is honest, and activist; it makes the viewer uncomfortable. Baker notes the sympathy her work generates and its power of advocacy. He goes on to describe the joy found in the beauty of form that contrasts with the anguish of the artist who is witness to animal suffering.

To help advocate against suffering, Baker makes suggestions. For example, he asks the artist to make with warmth, the warmth of breath such as that in Gabriel Orozco’s Breath on piano, a work not about animals, but Baker highlights it as art about living. He describes other breath work such as the participatory 1999 work of inflatable latex animal hides by Sutee Kunavichayanont. Here the gallery visitor can breathe life through tubes back into the lifeless bodies. Baker also repeats Deleuze and Guattari’s resolution to becoming animal artist, and that is to use speed, to be present, and to make good art. Baker describes this as shifting perspective, to move away from an anthropocentric place, to use fear and excitement to take the artist from creating subjects to creating events.

In this guidance, Baker’s reference to the extensive writings in A Thousand Plateaus slows this essay. Deleuze and Guattari’s theories are complex and can distract with each reiteration about becoming-animal, but this book, at least Baker’s essay, encourages reflection for the artist advocate. As in Lisa Moline’s photographs, the human hand, visible or invisible, is always part of how we present and re-present animals but there are lessons to learn if we don’t wish to make animals wholly human spectacle.

What does this mean for the animal advocate illustrator?

Baker describes through examples, how the illustrator can commit to positive representation of animals, and he reinforces our obligation to do so. There is truth in representation in the examples, in Olly and Suzy’s life drawings, in Lisa Moline’s destaurated photographs of death and clearly in Sue Coe’s activist art.

So, the advocate illustrator can take these ideas, with Baker’s suggestions to make with warmth, speed and presence, and explore them through experimental practice.

Steve Baker has written several books about animals and art.

Also by Nigel Rothfels,
Savages and Beasts:The Birth of the Modern Zoo
https://jhupbooks.press.jhu.edu/title/savages-and-beasts